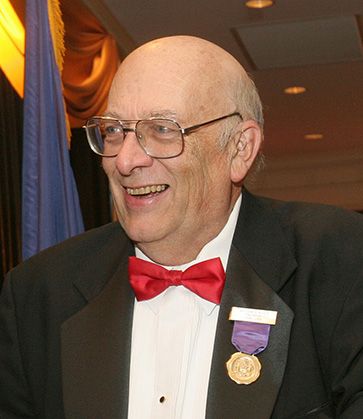 William H. Kelly was the colorful and outspoken former mayor of the Village of Asharoken. Known for his quick wit and trademark cigar, Bill was most importantly a staunch advocate for local home rule and municipal government. He delivered and proved that a small government could still be a powerful government.

Bill served as mayor of the Long Island village from 1982 to 2008, and died in 2014 at the age of 73. Born in Kingston, NY, he was educated in the Kingston Public Schools and received a degree in Electrical Engineering from Villanova University and a Master’s Degree in Economics from Georgetown University. He moved to Long Island where he owned WHK Leasing, a high technology leasing company. He was a passionate reader, particularly of the history of the Civil War, with a personal library of 6,000 books. Mr. Kelly was a lifelong Kiwanian starting in high school and continuing with memberships in clubs both on Long Island and in Virginia. He received the Legion of Honor award for 30 years of membership in Kiwanis.

Established with a generous $15,000 gift bequeathed to NYCOM by Bill Kelly, Past President of NYCOM (1988-89) and Mayor of the Village of Asharoken from 1982 to 2008, the Mayor Bill Kelly Leadership Education Scholarship Fund has been established by the NYCOM Executive Committee to assist city and village officials in accessing the municipal training Mayor Kelly believed was essential to effective municipal leadership.

Two yearly, one-time scholarships of up to $1,000 for training of local elected or appointed officials are awarded. The training need not be provided by NYCOM but must have a leadership component and practical application to the individual’s role as a public official in municipal government. The training may not be partisan and current membership in NYCOM is required. Need will be considered in the scholarship committee’s decision-making. Applications are due January 1 and July 1 each year. Winners will be notified within 30 days following the deadline.